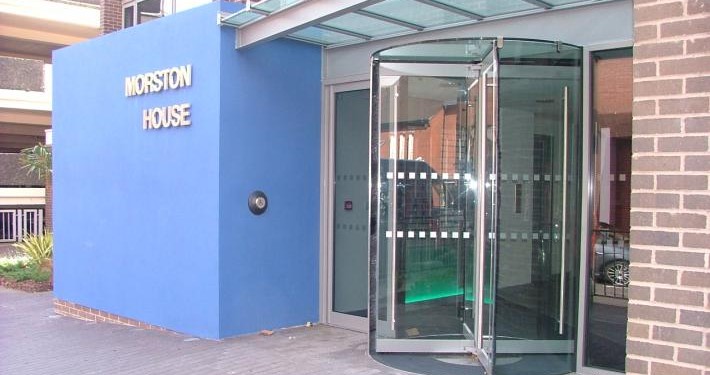 This concrete framed multi-storey 1960’s office building had until recently been used as the regional base for the HSE who vacated to smaller purpose built accommodation. The practice was therefore commissioned by our client/landlord to carry out a modest cost-effective refurbishment project with a view to letting the building on a multi-occupancy basis. Over the years the building had been subdivided to create a warren of offices and corridors and so the first exercise was to strip everything back to the bare open plan floor plate to create single office suites of around 4500ft2 per floor or 2200ft2 per ‘wing’.

To cater for perceived market demand smaller serviced offices were included on the first floor. We then considered the approach to the building and the service core; the current arrangement had no ‘street presence’ and included only a small waiting area once inside the doorway with no reception position. Furthermore it was unattractive and had no logical hierarchy and not DDA compliant. Space in the core was limited and so our solution was to introduce an abstract ‘blue cube’ extension at GF level which would not only provide the additional floor space for a bespoke reception and free up space for a waiting area but would also create a covered recess at the main entrance and give the building visual identity in the street scene. It was envisaged that the reception would be manned by a concierge during normal office hours. The mundane staircase balustrade was replaced with a new contemporary stainless steel balustrade and concealed lighting to give the vertical stair core a new lease of life and make it a focal point after dark. The lift car was also replaced.

Whilst considering the refurbishment options we specifically explored improvements to the environmental controls and the possibility of making the building more energy efficient. Air conditioning was considered however due to the limited headroom, short span of the building and the now open plan office suites we opted to replace the existing single glazed aluminium windows with new double glazing incorporating smaller ventilator hoppers to facilitate natural cross ventilation. Additionally the out-dated and inefficient perimeter heating system was replaced with a series of vertical panel radiators on each structural column to facilitate zone and localised control and thus greater efficiency. Rental income from the additional floor space freed up by removal of the perimeter heating system made a significant contribution to the cost of new heating system.

Our appointment here provided a multi-disciplinary service of Architect, QS and CDMC. The project was carried out by Kettle & Talbot Building Contractors who won the contract following a competitive tender process, and was completed in August 2007 at a contract value of just under £1.5m.