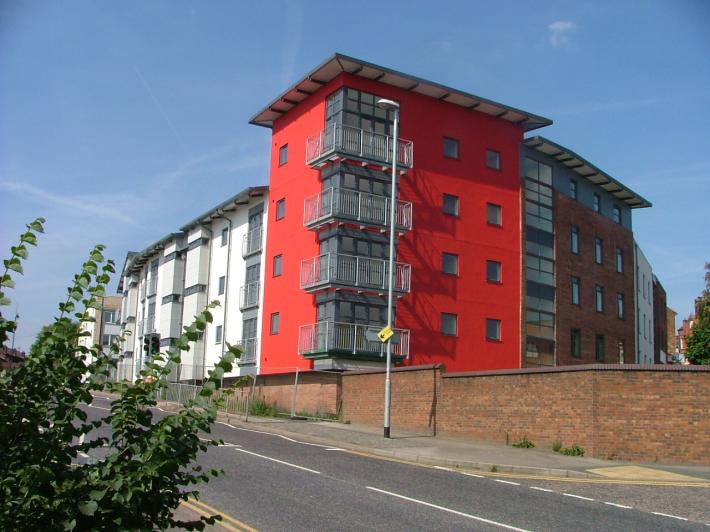 This project was commissioned by a local Developer ‘Talbot Developments’ to redevelop a derelict pot bank to provide 25 new-build apartments, 4 social town houses and a 25 space ‘undercroft car park’ with a landscaped courtyard roof.

The concept for the development was based on a detailed site analysis and discussed with the City Council and also presented to a meeting with Urban Vision. From this base floor plans and elevations were designed to relate to the concept layout and overall site context. The resultant scheme comprises of 3 principal components;

Firstly there is the main ‘hard edge’ development which fronts onto Woodbank Street where the natural topography falls away towards the south east. This happens to be the busiest commuter route but also is the most open and exposed face of the development. Accordingly the development here is less constrained by architectural vernacular and can respond directly to the prevailing conditions; the building is generally 3 storey located above an ‘undercroft’ car park which is subterranean for a great deal of the facade but which emerges as a fourth storey to the south east corner of the development. Not only does this result in the internal courtyard being pleasantly landscaped instead of being dominated by car parking but it also lifts the majority of the dwellings above street level to mitigate potential traffic nuisance and take maximum advantage of the southerly and elevated aspect.

Secondly, where the scheme wraps around the site to join up with the extg properties in St Johns Square; here the scheme takes on a more vertically articulated and fragmented appearance to relate to the existing individual Georgian proportioned properties which form the streetscape to the Square.

The final component is the ‘infill’ town housing which replaces the derelict building along Furlong Passage itself. Originally conceived as additional apartments, this accommodation is included at the request of the local partnering RSL. Being of a very limited footprint, the accommodation has been arranged to give maximum privacy at street level whilst offering maximum aspect over the new landscaped courtyard at upper floor levels.