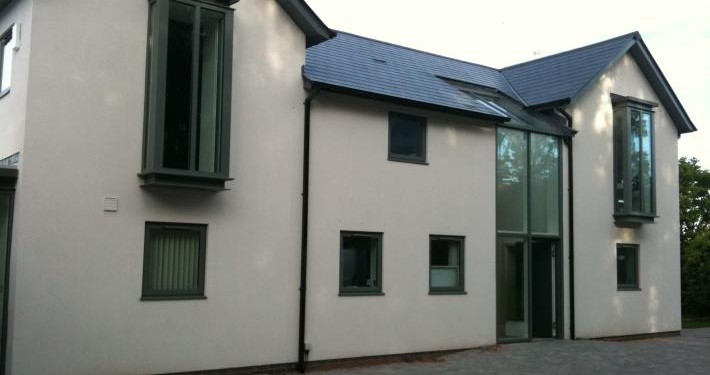 Following a referral from a local estate agent we were pleased to be commissioned to design a new detached contemporary dwelling for a high profile client. After due consideration we narrowed our initial concepts down to two fundamental approaches with one involving remodelling of and extension to the existing dormer property and the other demolition and a new-build contemporary replacement dwelling.

The latter was reminiscent of the style of property commonplace in California however much to our surprise our client opted for the more traditional refurbishment/extension option. As the design evolved and costings were reviewed it became apparent that even though the client preferred the refurbishment option there would be significant financial gains to be made by demolishing and replacing the majority of the existing dwelling with new-build construction. Accordingly a revised planning consent was obtained for what is essentially a new build dwelling but which re-uses the majority of the previous footprint, foundations and GF slab.

Our analysis of the site quickly identified the views over the countryside to the west as the single most important factor to exploit in the design hence the design places great importance on this. From the moment you arrive at the front door you get a glimpse through the entrance hall and beyond over the valley. Similarly the lounge occupies a large area of the western side of the floor plan and incorporates a full width sliding glazed screen which not only frames the views when seen from the lounge but permits the internal and external spaces to become one in the summer months by opening up onto a large decked area which again enjoys the unrestricted open views. This is further exploited by the inclusion of the two balconies at first floor level. Whilst the western elevation is very open and accessible to benefit from the views and provide private amenity space the eastern elevation is deliberately more ‘defensible’ and conveys an element of security at the approach to the property which is only bridged by the inclusion of the entrance hall glazing and the feature box bay windows to the first floor bedrooms.

The practice has been commissioned to provide a full traditional architectural service (RIBA work stages A to L incl) and is currently over seeing it’s construction by ‘Kettle & Talbot Building Contractors’ who won the £380k contract following a competitive tender process. The project was commenced in February 2010 and is due for completion shortly.